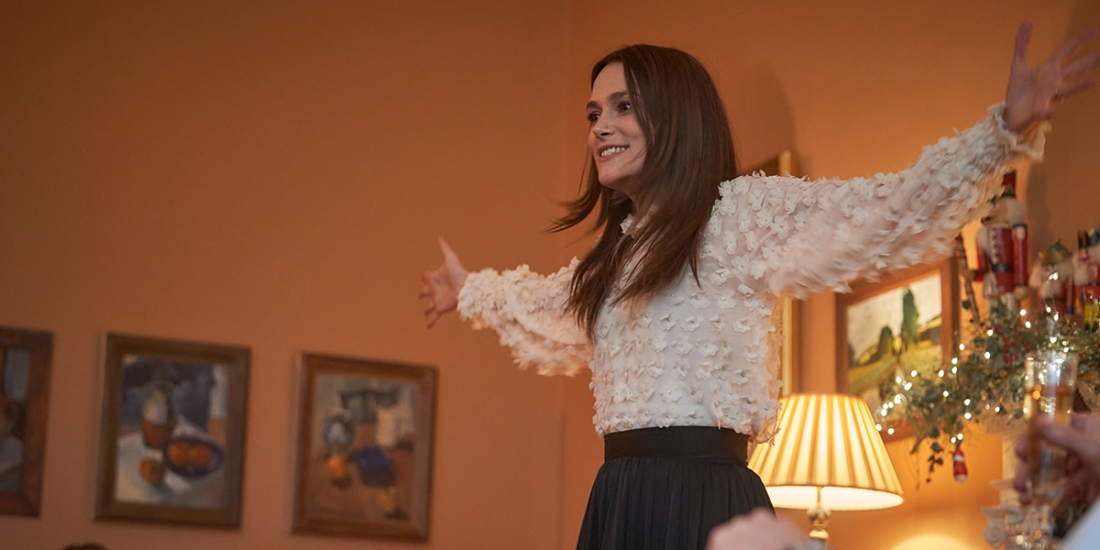 Although Silent Night was filmed right before the COVID-19 pandemic, it feels like a film in response to it. The film begins like a traditional Christmas movie. There are cloudy cool skies, saccharine Christmas pop plays on the radio, and an ensemble of people gather in a home to celebrate that time of year. If you had stopped watching the movie after 20-minutes, it would not be inconceivable to think you were watching a Love Actually/Love the Coopers knock-off. However, the twist in Silent Night is that this is going to be the last Christmas (and not the one that involves giving someone your heart) as a dangerous pink cloud caused by years of accumulated pollution is about to kill every person that is affected by it.

This dramedy, directed/written by Camille Griffin, is a visualization of the classic T.S. Eliot quote, “This is the way the world ends/Not with a bang but a whimper.” As this group of friends and family gather at a nice British family cottage for the last time, it is the mundane that takes precedence as a distraction from existential dread. The hosts for this final Christmas soiree are Nell (Keira Knightley whose casting feels like a deliberate allusion to Love Actually) and Simone (Matthew Goode). They have three children including the youngest son Art played by Roman Griffin Davis from Jojo Rabbit being directed by his mom. His real-life brothers, Hardy and Gilby, play his older twin brothers as well, making this movie a real family affair.

The ensemble cast is filled with phenomenal actors, all who get short shrift by too many components and clichéd caricatures. There is Tony (Rufus Jones), his trophy wife Sandra (Annabelle Wallis) and their precocious daughter Kitty (Davida McKenzie). There is the doctor James (Sope Dìrísù) who everyone silently judges for bringing the barely 20-year-old Sophie (Lily Rose-Depp). And finally, there is the lesbian couple of foul-mouthed Bella (Lucy Punch) and timid Alex (Kirby Howell-Baptiste). The results are a The Big Chill-esque film of people oversharing and truth telling.

The film feels neither funny nor compelling in that way. A myriad of shrewd juxtaposition is set up by the film’s premise – Christmas/apocalypse – but the characters feel too thing to ever get at any visceral truths of the situation. There are maybe some chuckle-worthy moments throughout, especially the morbidity of end-of-life proceedings – especially one involving Coke.

The one person who gets any meat to play with is Roman Griffin Davis, who shows the talent of not being a one-film wonder with Jojo Rabbit. As everybody prepares to take the “Exit Pill” offered by the British government (“to die with dignity”), Art, with a melancholic tinge of idealism wonders if they have to be resigned to their faith. He plays Art with depth and emotional maturity.The rest of the Silent Night feels slight and underwhelming. Everything hints at a much better film from performances to even the clever double meaning of the title. But cleverness in thought can only go so far.

Silent Night was screened as part of the 2021 edition of the Toronto International Film Festival and will release theatrically and on AMC+ in December.