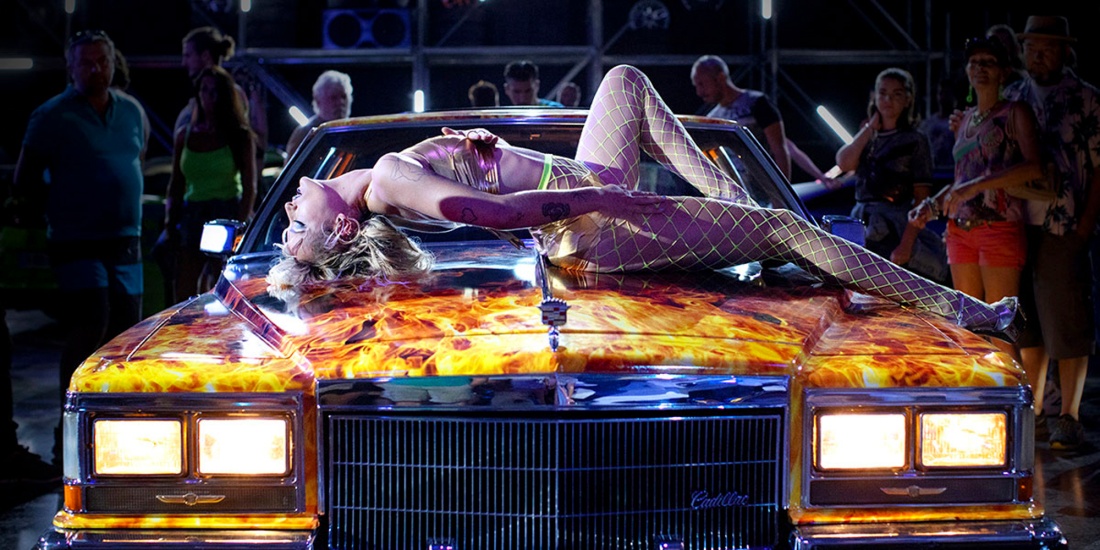 Contrary to popular sentiment, Alexia played by Agathe Rousselle having sex with a car in the opening minutes of the film is actually one of the tamest and most sensical moments of the Palme d’Or winner Titane. Which requires the aforementioned first time actress Agathe Rouselle to bite, claw, stab, pinch, and tear her way along the film. Ducournau builds on her debut solo Feature Raw with another unconventional film that is simultaneously gripping and absurd. Rooted in body horror, a genre that for so long was synonymous with David Cronenberg is now beginning to feel more global and more expansive.

The film opens with a long look at a seeping oily undercarriage that almost seems biological, with the hum of an engine and a little girl, the camera skirts up under the hood to look at a thrumming belt before young Alexia the young girl humming in conjunction with the vehicle gets in a car accident with her father. She is rushed to the hospital and over an unclear amount of time has a titanium plate put in her skull. Ostensibly serving as the inspiration of the title of the film, Titane.

Reusing the name Alexia from Raw isn’t the only repeated decision Ducournau makes. Bringing back Garance Mariller who played Justine the young veterinary student who develops unorthodox tastes in Raw as a supporting character wears the same name again in this film, Justine. Alexia (Rousselle) and Justine (Mariller) are each car show models, shown to the audience in a long neon lit take that capitalizes in a Alexia draped across the hood of Caddy dancing, horizontally.

Titane straddles multiples lines, juggles multiple hats, and sheds all convention with a long look at the taboo. Murder, mental illness, incest, aging. These types of themes are normally tiptoed around. Ducournau opts instead to look down the barrel of the gun, and bring us with her. A metallic chopstick dealing deafening blows. Body augmentation, chemical and mechanical. Eventually Alexia through circumstances that aren’t quite explained becomes very visibly pregnant while also needing to pretend to be a boy to escape the authorities that are searching for her. She opts to take on the identity of a young boy who was taken years earlier. This introduces us to Vincent Lindon’s Vincent.

Vincent is a firefighter tasked with saving lives and casts a strong contrast to Alexia. There is an enormous range of events and moments that occur between these two in the meat and marrow of the film that deserves engagement but due to amount of spoilers that would provide so close to the release of the film I’ll instead steer away from them for now. What I can say is these interactions lead to instances of catharsis, of shame, and acceptance. There’s also glorious exterior and interior firefighting sequences. With the roar of flames cascading up walls and sprawling across a sparse forest. It’s particularly in these fiery sequences that the sound design and foley work are expressly on display in crystal clear and clean exquisiteness.

Ducournau has a penchant for communicating implicit ideas about self governance, discomfort in our skin, and the personal gluttony that can lead one to commit an act that is taboo. Few films or filmmakers are as straight forward in their risks, as formally accomplished, or as committed. Titane is violent, sexy, and absurd. If it’s playing near you, take the time to see it in a theater.