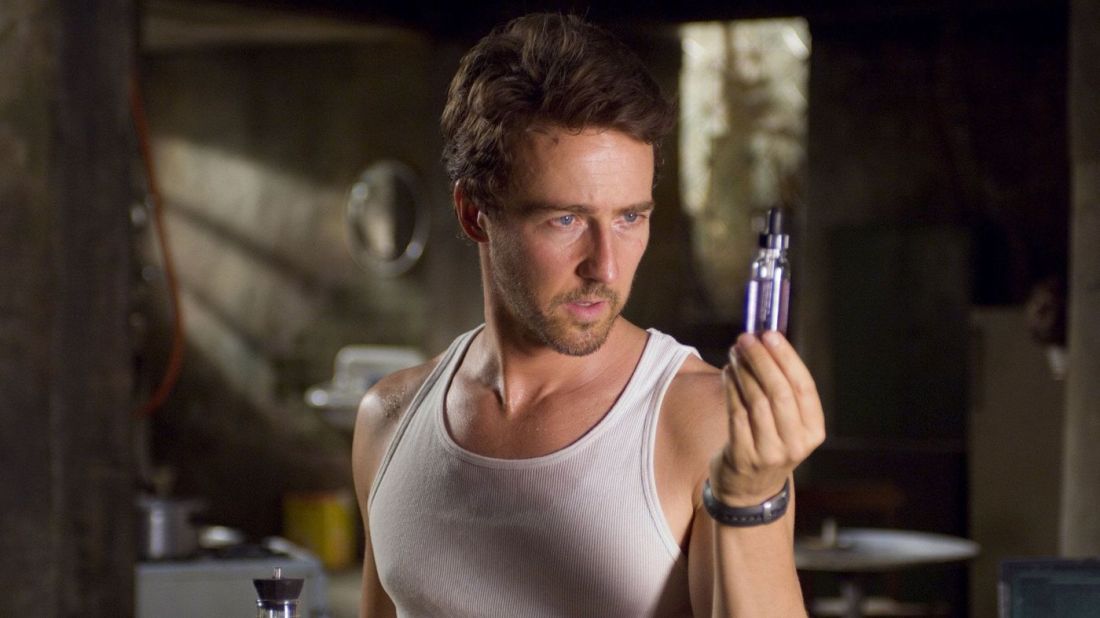 In these retrospectives, Anna will be looking back on the Marvel Cinematic Universe, providing context around the films, criticizing them, pointing out their groundwork for the future, and telling everyone her favorite scene, because her opinion is always correct and therefore her favorite scene should be everyone’s favorite scene. Now, onto the movie that everyone forgets is canon.

Thor: The Dark World might have the distinction of being the worst Marvel movie, depending on whom you ask, but The Incredible Hulk most certainly is the most forgettable entry into the MCU, with most fans regarding it as barely canon until William Hurt appeared in Captain America: Civil War, reprising his role as Thaddeus “Thunderbolt” Ross.

The first reason fans purposely forget The Incredible Hulk is that it is simply a forgettable movie.

Audiences having just seen Ang Lee’s 2003 movie Hulk starring Eric Bana, director Louis Leterrier eschews an overlong origin story, instead starting in media res, which spares us a rehash of an oft-repeated story but also leaves us grasping for details about Banner’s first Hulk transformation shown over the opening credits (with some very 2000s graphics reminiscent of Elrond’s floating head in The Fellowship of the Ring). Why did Banner volunteer for this dangerous governmental experiment? How was he involved? What exactly happened that made him turn into the Hulk? We don’t know, but we are expected to care about this random man hiding in Brazil anyway.

Banner has found work at a bottle factory, where he demonstrates his intellect but rebuffs any offer of promotion, determined to stay where he is. He seems to be doing okay: he has a dog, he practices martial arts and breathing techniques, his hot coworker makes googly eyes at him. He’s also looking for a cure for his little green friend, corresponding with an unknown “Mr. Blue” about bloodwork and cells, and looking forlornly at a picture of Liv Tyler’s Betty Ross. After an accident in the factory allows the US military to track Banner down, Thunderbolt Ross sends a team led by highly-decorated Emil Blonsky (Tim Roth) to take Banner into custody.

Obviously, this ends rather poorly.

So Banner wanders back to the US and reunites with Betty, and they clearly want to get together despite Betty now dating a guy named Leonard (Ty Burrell), and we finally get some backstory. Bruce and Betty worked together on a scientific experiment for the military, ostensibly to make humans immune to gamma radiation but in actuality—though they didn’t know it at the time—to create super-soldiers. The exposure to gamma radiation created the Hulk within Banner, who pokes his head out whenever Bruce’s heart rate rises above 200 beats per minute. (Marvel entirely abandoned this heart rate conceit by The Avengers.) However, the serum has since been refined, and General Ross gives some to Blonsky, which obviously will end well. We also learn that General Ross is Betty’s father, something that is treated like a huge reveal by the movie but falls flat because a) we were not shown any reason to care about their relationship before the reveal and b) it has practically no effect on the rest of the movie.

So Betty and Bruce go to track down Mr. Blue, who turns out to be the professor Dr. Samuel Sterns (Tim Blake Nelson), who turns out to be just a plot device (there are hints at him becoming his comic book counterpart, The Leader, but these are dead ends) to get Blonsky to fully turn into his comic book counterpart, Abomination. There are some big CGI fights and then it’s over; while Hulk vs. Abomination in this movie and Iron Man vs. Iron Monger from Iron Man sound similar on paper, the former gives us little reason to care about their fight whereas the latter builds a solid relationship between Tony Stark and Obadiah Stane before it all falls apart, so we feel invested in that clash of metal suits. (Tony shows up for about two minutes at the end to broach the Avengers Initiative with General Ross and those are the most interesting two minutes of the entire movie.)

It’s not that The Incredible Hulk is bad, per se—there remains a base level of enjoyment to most Marvel films, and at least from me you probably won’t see a score dip below 50—it’s simply a bit forgettable, a fact compounded by the way Marvel has tried to sweep the film under the rug, which in turn is compounded by the fact that Universal and not Disney owns the rights to any solo Hulk movie. (Remember when Marvel sold off character rights when they almost went bankrupt? Here are the ramifications.) It’s all very thorny.

The second, more obvious reason The Incredible Hulk has been neglected is Mark Ruffalo.

Mark Ruffalo took over from Edward Norton in the role of Bruce Banner come 2012’s Avengers, and aside from a joke about how he “broke Harlem,” the events of The Incredible Hulk are ignored. The circumstances regarding the recasting are murky: Norton, who helped write the film with Zak Penn (though only Penn received credit), wanted to go down a darker, grittier path with Hulk for any sequels, à la Christopher Nolan’s Batman trilogy, whereas Marvel was already starting to find their sweet spot as quippy, fun, and fast-paced action movies. Norton is also rather famously rumored to have a big ego, and Ike Perlmutter, Marvel Entertainment’s CEO, is rather famously stingy (as well as racist and sexist, but more on that in the later entries). The official statement from Marvel on Norton’s departure read, “Our decision is definitely not one based on monetary factors, but instead rooted in the need for an actor who embodies the creativity and collaborative spirit of our other talented cast members. The Avengers demands players who thrive working as part of an ensemble,” so infer from that what you will.

Looking back on Norton’s performance after five movies with Ruffalo (seven, if you count his cameos in Iron Man 3 and Captain Marvel), it’s hard not to be biased towards the latter. Ruffalo’s Banner is a bit more bumbling and awkward, a smart man who gets in over his head. Norton’s Banner is… sexy? Did they try to make him sexy in this movie? He takes his shirt off, fights people, (almost) has sex, suavely winks at Betty before getting injected with gamma radiation… It feels bizarre compared to the current Banner, who has mostly remained unsexualized. (That Age of Ultron “romance” didn’t happen.) Norton feels far too cool for the role, and furthermore fails to provide Banner with an inner life that goes beyond “sad” and “horny for Liv Tyler.” Ruffalo gives the character a certain innate lovability while portraying the inner torment with more nuance and subtlety than Norton managed.

In fact, where Iron Man soared on the strengths of its characters and performances, The Incredible Hulk falls flat. William Hurt and Tim Roth are barely given anything to do and remain hollow outlines of characters: General Ross is the stock stoic military leader determined to subdue the enemy at all costs, Blonsky is the stock ruthless soldier who wants to amass more power because… because.

And then there’s Betty.

Betty Ross is hardly a character at all: she is a Strong Female Character because she is Smart, and therefore must be an Independent Woman. (Strong Female Characters don’t need to actually act as people, they just need to have “progressive” traits such as intelligence and spunk so the audience knows that you the screenwriter are Woke and think that women too can be Smart.) What did she think about the project she worked on with Bruce? How did she react when it turned south? Gee, I don’t know, but it doesn’t matter because Liv Tyler looks hot and sad in the rain. Betty is smart, understanding, kind, supportive, alternatingly maternal or sexy when the script calls for it, and above all, flawless. She gets angry at a bad taxi driver and that’s about it, and that anger is all in service of Bruce. In short, Betty Ross is the “cool girl” monologue from Gone Girl, a far cry from our previous MCU heroine in Pepper Potts. (Not that Iron Man—or, indeed, the MCU as a whole—is a paragon of gender equality, but at least Pepper is a character with an actual personality.)

The Incredible Hulk is still fine enough, and is an interesting glimpse into the early Marvel days before they figured out their winning formula; this movie attempts to be darker than Iron Man, lacking the humor that has become trademark for Marvel and trying to do… a psychological drama? A character study about a big green guy that goes smash? Whatever it’s attempting to be, it fails, and becomes one indistinguishable mass, its characters utterly lacking in the heart and charm that defined Iron Man and would go on to give the MCU its staying power. But it’s not bad background noise.

Groundwork: Marvel has no big master plan; rather, they plant seeds wherever they can in the hopes that some of them might one day germinate. None of these were planned from day one, lest the whole ship sink, but the seeds germinated nonetheless:

Anna’s Favorite Scene: Bruce and Betty try to get it on (never mind her other boyfriend!) before his heart rate monitor goes off, warning him he will Hulk out if they progress any further (never mind the random hot woman he’s implied to have slept with in Brazil!). Kinda funny.

The Incredible Hulk is currently available to rent and purchase from most major digital storefronts.